I decided to try this recipe for fudge ball cupcakes from Elinor Klivans' Cupcakes! book, as they were described as "mini-fudge brownie cupcakes" which sounds pretty damn good to me. I already have a go-to recipe for cocoa brownies, as well as decadent brownie cupcakes, but still, I wanted to try something new. I deviated from the recipe by using a chocolate ganache (I had some left over sitting in the fridge) instead of her recommended chocolate coating, and I dipped the tops of the cupcakes instead of the bottoms, which I thought made more sense. But whatever floats your boat, you should do whatever makes you happy is what I always say. 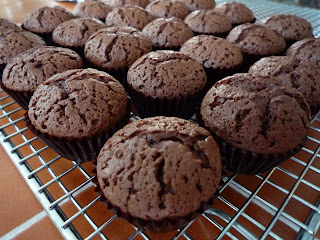 My fudge mini babycakes are just waiting to be dipped. 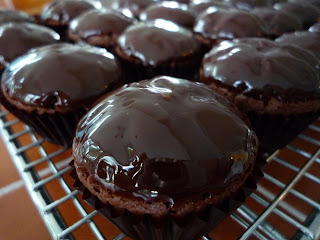 Look how shiny the ganache is! You can actually see my camera in the reflection!

Directions:
1. Preheat the oven to 170 degrees Celsius. Line 2 mini-muffin tins that have 12 cups each with mini paper liners. Spray the paper liners with nonstick spray.
2. Put the butter and the chocolate in a heatproof bowl and place it over, but not touching, a saucepan of barely simmering water, or simply use a double boiler. Stir th butter and chocolate until melted and smooth. Remove from the water and set aside to cool slightly.
3. In a large bowl, whisk the eggs, sugar and salt to blend them thoroughly, about 1 minute. Whisk in the slightly cooled chocolate mixture and vanilla to incorporate them. Whisk in the flour just until no white streaks remain.
4. Fill each paper liner with about 1½ tablespoons of batter, to just below the top of the liner. Bake just until the tops feel firm and a toothpick inserted in the center comes out with a few moist crumbs clinging to it, about 24 minutes. (Mine were really tiny, I baked mine for only about 22 minutes.) Cool the cupcakes for 10 minutes in the pans on wire racks.

This is where I deviate from the recipe, I just dipped the tops of the cupcakes in chocolate ganache to keep things simple.
Posted by Kay at 8:09 PM

ooh, they look so good! I would love to have one right about now :)