As a home baker, one of the biggest drawbacks I face is that I can't offer 12 different cupcakes per box like those donut joints and their multi-flavor boxes. Each recipe I have makes at least 12 cupcakes, and unfortunately I don't have a shopfront in which to display the remaining 11 cupcakes per recipe, which when is times 12, comes up to 132 cupcakes. So most people are stuck with just one flavor of cupcake, unless they order several boxes. One way to incorporate variety, I've found, is to use one cupcake base, such as the humble vanilla cupcake, and then finish it off with different toppings. I did just that for a recent order, topping off the vanilla cupcake base with salty caramel and chococlate ganache (they're the ones hiding right at the back), strawberries and vanilla buttercream, blueberry pie and vanilla buttercream and apple pie a la mode. 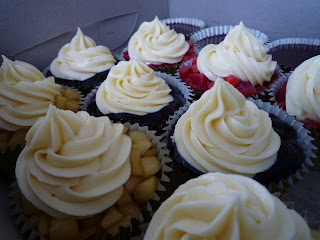 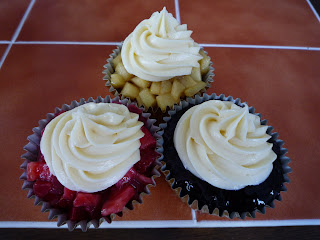 So it's not quite the same as getting 12 different cupcakes in a box, but it works for me, and my client was pretty happy so I'm glad it worked out.

PS. I had some left over sauteed apples, and a couple of spare cupcakes, so I thought, maybe now's a good time to try and caramel apple pie cupcake a la mode! I wasn't quite sure how the apples would go with the salty caramel, but my mom and my friend aka the guinea pigs both gave them the thumbs up. So yay!
Posted by Kay at 11:19 PM