I've made this pooch-friendly cake a couple of times now, and it's been good to me thus far. The first time I made it I used a bundt pan as per the recipe, and it actually turned out quite nicely. The second time around I decided to try and make it into cupcakes, which was ok too, except the cake got a bit stuck to the cupcake liners. Today I made the cake again, but this time I used foil cupcake liners instead, and I think the sticking won't be such a problem. I do find that the amount of butter the recipe calls for is quite a lot, so I tend to cut it down a bit. I also like to add just a touch of honey to the batter, in the hopes that it makes it tastier for the pooches. So far it's proven to be a hit with all the dogs its been served too, even pleasing the likes of Mr. Brown, who's a somewhat picky eater. So yay! I like to top these off with some carob chips, which I place on top of the cupcakes the moment they are out of the oven so that they'll melt and I can sorta smooth it out to look like chocolate frosting. For today though I was low on the carob, so the cupcakes are frosting-less. Oh wells. I'm hoping the doggies won't even notice. 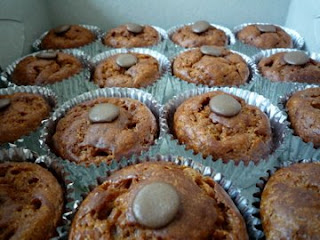 Sitting pretty, waiting to be scarfed by the doggies!

Directions:
1. Preheat oven to 180 degrees Celsius.
2. Beat together banana and butter until creamy. Add eggs and water, and beat well. Stir in the dry ingredients and beat until smooth.
3. Spoon batter evenly into an oiled and floured bundt pan, or into cupcake pans (lined with foil liners). Bake bundt cake for 35 minutes, cupcakes for 25 minutes.
4. Remove from oven and cool on rack for 5 minutes, then remove from pan and cool completely. 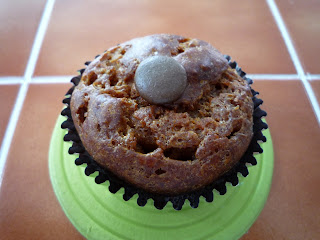 A pooch pleasing cupcake.
Posted by Kay at 5:54 PM

Looks interesting! I curious, what did you use as a garnish?

It's actually a carob chip, made especially for dogs. The brand is Good Boy, and you can see a photo of it here: http://fattyfatfats.blogspot.com/2008/08/doggone-it.html