There's this old skool (and I mean old skool) steak restaurant in town, which has been around even longer than I have. It used to be THE place to go to on a hot date (my boy says that when his parents were pak tor-ing - that's dating if you didn't already know - this is where they'd go for a romantic dinner. Hee hee. And apparently the decor hasn't changed much till this day, and neither have the wait staff! Seems that there's this old dude who's been there as long as the restaurant's been open. Amazing or what? I've seen him there on every occasion that I've been there to eat. So maybe the decor isn't quite as hip and happening as it might have been back in the day, but it's definitely got its charms. I just love the vintage, old skool vibe of the place, which I would think is fairly hard to come by anywhere else. Sure you've got tons of hot new restaurants with their sleek & chic designer furnishings and tastefully appointed interiors so you can dine in style... yadda yadda yadda... but this, this is really something else. Anyways. The restaurant that I speak of is none other than Sashlik, a Russian-esque steakhouse that's been around for eons. On the menu is a selection of hearty steaks, which is pretty much what it's known for, as well as a couple of seafood options. It's also got a fantastic Bomb Alaska (so I've heard), which unfortunately I have yet to try because everytime I'm there it's bloody sold out. Bleh. In any case, what I really like here is the Borscht Soup. Well, it is a Russian-esque steakhouse after all. It's hearty, it's got lotsa good stuff, it's just real yummy. What's not to love? My boy and I always order it when we're there.

So then I decided that I wanted to try and make it at home, so I don't have to go there every time I get the craving for a big bowl of piping hot Borscht Soup. I found this recipe online somewhere, I think it's allrecipes.com, but I've since made it a couple of times and tweaked it to get it just how I like. It's got all sortsa good stuff: beets, cabbage, sausage, onions, carrots, potatoes... it's a meal in itself! And a mighty fine one too, might I add. 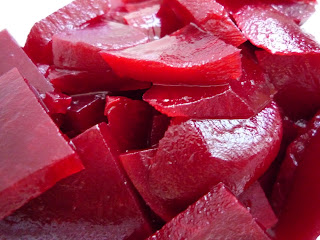 Ruby red beets... so good but so potently staining. 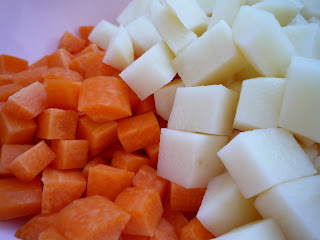 Chopped carrots and potatoes to add body to the soup. 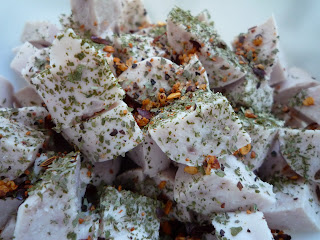 I bought the wrong bloody type of sausage this time... it totally didn't crumble at all. Bah. And it looked kinda pale and bland. So I tried to spiff 'em up with some herbs and seasonings. 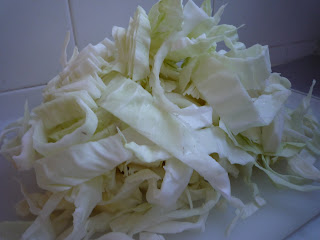 My mountain of cabbage... 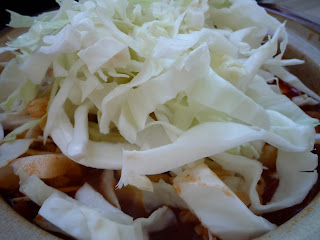 ... waiting to be crammed into the pot. Luckily it all fit. 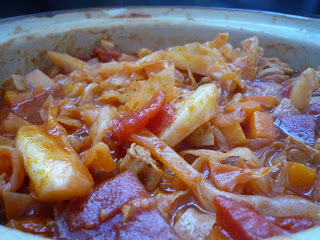 My giant pot of Borscht Soup.

Directions:
1. Remove the casing of the sausage and crumble into a big pot together with the oil and cool through. Add onions and garlic and cook until tender. Add tomato paste and ¾ cup broth and stir through until well-blended.
2. Add remaining broth to the mixture, and bring to a boil. Add beets and cook until they've lost their color. Then add the carrots and potatoes, and cook until they're tender, about 15 minutes. Finally, add cabbage and diced tomatoes, season with salt and pepper and simmer. Serve piping hot with a dollop of sour cream. 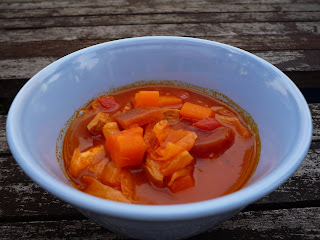 My husband's doctor has advised him that he MUST consume more fiber -- that his current low residue diet is potentially bery dangerous.

I think he would love this soup and I plan to make it for him soon.

I'm glad I can use canned vegetables, as that is what he prefers.